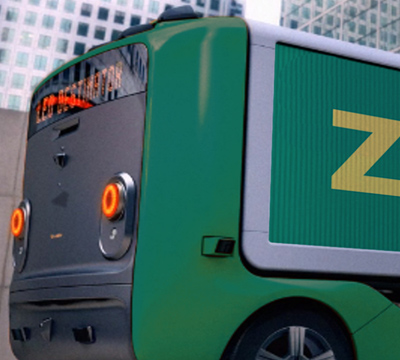 UDELV AND CITY OF BRUSSELS COOPERATION

UDELV AND CITY OF BRUSSELS COOPERATION

Autonomous delivery vehicles have the potential to revolutionise last-mile transport and help cities reduce congestion, noise and pollution while increasing safety and efficiency. Seeing this potential, Ziegler Group is actively engaged in an autonomous delivery pilot project in Brussels.

With several such electric vehicles on order from US-based manufacturer Udelv, Ziegler Group is working closely with the city of Brussels to work through the needed testing and regulatory obstacles before deliveries can be made on public roads. This project is just one of the initiatives in the ‘Ziegler: Now Even Greener’ programme.

ENVIRONMENTAL IMPACT
How can AVs help the environment ?
ENVIRONMENTAL IMPACT
Autonomous delivery vehicles could very well be one of the technological advancements that will usher in cleaner, quieter and healthier cities that provide a better quality of life to all residents and reduce our environmental impact.
Autonomous vehicles can make deliveries around the clock, reducing traffic congestion during peak times. The vehicles are fully electric, contributing to a cleaner environment and less noise pollution. Their relatively compact size makes for less impact on roads, especially the narrow historic streets of Europe’s city centres.
“This is a major step towards a sustainable fleet of commercial vehicles for Ziegler Group,” said Diane Govaerts, Ziegler Group CEO. “Similar to our current Cargo Bike project that is making deliveries in vehicle-restricted areas of Brussels, the Transporter – Udelv’s autonomous driving and electric, cab-less delivery vehicle – is another step in exploring new possibilities for less intrusive and more ecologically-friendly last-mile deliveries in crowded urban centres.”
IMPORTANCE OF SAFETY
Are AVs safe ?
IMPORTANCE OF SAFETY
In short, yes, self-driving technology is already statistically safer than with a human behind the wheel, but the technology still needs more development and testing, which is why Ziegler Group is getting involved now.
Featuring Level 4 autonomy, the Transporters use Mobileye technology – an Intel company that specializes in autonomous vehicles. The vehicle senses and interprets its environment using a camera-centric configuration. Using a robust system that can drive solely based on cameras allows us to pinpoint the critical safety segments for which redundancy from radar and Lidar is required. Extensive testing with governmental oversight will be undergone before self-driving delivery vehicles are put onto European roadways.
Other services
Road Freight
Air freight
Rail freight
Sea freight
Logistics
Customs
Project Cargo
Packaging
Special Request by Ziegler
Cargo Bike
You may also be interested in

Ziegler Group understands supply chain challenges more than most. Filled with excitement, we are looking forward to receiving the first autonomous delivery vehicles that we ordered last year so that we can begin testing them in conjunction with various research institutes and government bodies in Europe.  However, we will need to be patient since our […]

Do you know that 99% of everything you buy, consume, eat and drink was transported to you by emissions-generating combustion engines? Most goods and food are not produced near your home. They need to be transported by vehicles with combustion engines to stores, depots, and even directly to your doorstep. At Ziegler, this is what […]